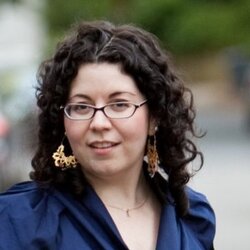 Anna K. Danziger Halperin is historian of gender, carework, social movements, and and public policy. She is the Associate Director of the Center for Women's History at New-York Historical Society, and former Andrew W. Mellon Postdoctoral Fellow in Women's History and Public History. She teaches in the Columbia University Department of History, as well as the joint N-YHS and CUNY School of Professional Studies Museum Studies program. She has previously taught courses in history, women's studies, and race and ethnicity studies at Columbia University and St. Joseph's College, Brooklyn.

In her research, writing, and public history work, Anna seeks to make policy history accessible to a broad audience because of the hidden, and often insidious, ways in which the state shapes daily life. Anna's research is animated by a desire to better understand the social construction of boundaries between public and private spheres in American history. Her research asks: how does social policy shape the conditions of everyday life and influence individual behavior, particularly for the women and children who are often its intentional and unintentional targets? Her work centers gender at the heart of political and policy history.

Anna completed her doctorate in history at Columbia University in 2018. Her dissertation, Education or Welfare? American and British Child Care Policy, 1965-2004, analyzes child care policies in the U.S. and Britain. She is currently revising the dissertation for publication with the new title, Whose Children? Debating Public and. Personal Responsibility for Child Care. The book provides a unique lens on how child care policy has been contested and has evolved since the 1960s, demonstrating how sixty years of dynamic, contingent policy debates among child care advocates and opponents has shaped our understanding of public and private responsibility for children’s care and contributed to this crisis of gender, racial, and reproductive justice. Since the early 1970s, federal child care policy has developed into a two-tiered system that perpetuates gender, racial, and socioeconomic inequalities. These were not inevitable developments, and tracing their contours can open new possibilities for future policy decisions. It also illuminates how neoliberal political rhetoric has fundamentally shaped the experiences of parents, children, and caregivers, whose labor is disproportionately performed by black and immigrant women and therefore undervalued and underappreciated.
The contrast with Britain shows, however, that this process was not inevitable.

​Anna's research has appeared in Twentieth Century British History, and a special issue of Signs: Journal of Women in Culture and Society on "Public Feminisms," as well as in op-eds for the Washington Post's history blog.  She has also published a number of solicited book reviews in peer-reviewed publications, and is the former editor of Women at the Center as well as a frequent contributor. Her public history work includes curating and co-curating major gallery exhibitions and special installations at N-YHS, including Salem Witch Trials: Reckoning and Reclaiming (2022-2023), Women March (2020), Milk: Life, Death, and Women's Work (2021), and Notorious RBG: The Life and Times of Ruth Bader Ginsburg (2021). She has had multiple media appearances in outlets such as PBS NewsHour, The New York Times, Washington Post, Time, Vox, and local television news.

Anna's work as a historian has been closely linked to contemporary political and social issues. As a researcher at policy think tanks (the Urban Institute and the Institute for Women’s Policy Research), she was a coauthor on research reports on U.S. child care policies and other related issues affecting families, and participated in all stages of project development.

Lists of ​Anna's research publications (including links) and teaching experience may be found on this website.